Mark is, of course, gone, but Eric and I have not been able to resist the lure of returning to Oregon. We've made so many good friends up there, and are strongly attracted by its Pacific Northwest beauty. Last year, we had an amazing time driving down the coast from Newport, exploring lighthouses, coves and rocky beaches. So, we planned another Presidents' Day trip, going instead north from Newport, hoping to make it all the way to Astoria in the northwestern corner. My research through all the materials we had received from the Oregon Welcome Center soon made it apparent that the Oregon coast north of Newport was so rich with sightseeing opportunities that we were unlikely to make it all the way to Astoria, but I thought we could make it to Seaside and head east to Portland (and I-5) from there.

Sebastian, at 17 years old. Still quite a kittenish expression!

We had breakfast with our gracious hosts in Albany. When we went into the restaurant, it was nice and sunny, but, over the course of breakfast, the sky clouded over. Well, the Pacific Northwest. After breakfast, we headed up to Corvallis to take OR 34 out to Newport. While filling Sydney's tank in Corvallis, we got a call from Lars that he and Paul had managed to make it off of their flooded farm and into town, so we got in a bonus visit with them at a Corvallis cafe. Then we drove into Newport and saw the kite shop where Mark took us on our first visit with him in Oregon in 1997.

It was shortly after visiting that kite shop that Eric took this picture of Mark with his new kite. 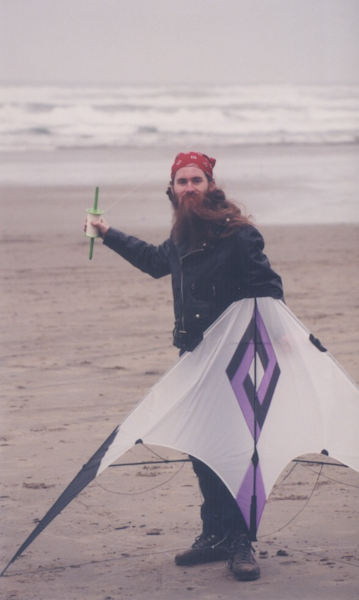 Our first stop was Donald Davis Park, still in Newport.

They had a little gazebo building with a stylish bike rack.

It wasn't raining, but it was extremely windy. We found a cache, but we took it inside that gazebo building to log it.

I looked at our web site from last year, and discovered that Newport had two lighthouses, and that we had accidentally missed one of them. So, we headed right for Yaquina Head Lighthouse.

Yaquina Head Lighthouse, the tallest on the Oregon coast.

The lighthouse is on BLM land, so, excitedly, I started to pull our national parks pass out of the glove compartment. Before I could find the pass in and among the registration, insurance card and all that other debris, the ranger told us that today was a free day. She handed us some pieces of literature and told us, ominously, "Be sure that, when you park, you park facing the front of the car into the wind. That way, the wind won't damage your hinges when you open your doors."

We passed a visitor center, where an arrangement of cones forced us off the main road into the parking lot. I suppose we should have gone into the visitor center, since the rangers seemed so determined to send us there, but we don't like to be herded and so headed right back out onto the road. We parked at the lighthouse. All the spots facing directly into the wind were taken, so we parked at an angle and got out of the car.

Oh, my goodness! Wow! I don't think I've ever felt such wind, except maybe at Yellowstone! A couple of Subway napkins escaped from the door pocket, and I was only able to catch one of them before it blew off into a cove. Eric pulled out his phone and started trying to look at the geocache listings, but the wind was so harsh that we decided to do this back in the car.

So we sat there in Sydney, looking out at the lighthouse and the cove, planning our caching. The car shook on its springs in the wind. It felt like a minor earthquake.

We found that there was a virtual cache right at the lighthouse. We pushed our way through the violent wind towards its base. I thought I had seen someone try the door and find it locked, but someone was coming out as we approached, so in we went. As we caught our breath just inside the door, my phone beeped with an entirely superfluous weather alert: "High wind warning."

We started to climb these stairs. There are 111 of them.

We got about halfway up before we met some people coming down. They told us that we might as well turn right around, because we would not be allowed in at the top unless we were part of a tour. Tours were free, but they were once per hour and the next one was full. Given the weather, there might be some cancellations, so we should check in at that visitor center that we had so blithely skipped.

Oh, no! It was already something like 14:40, and we hadn't even left Newport!

So, we drove back to the visitor center. The ranger there told us that a few people had not yet shown up for the 15:00 tour, so if we hung around for about 10 minutes or so and they hadn't come, we could have their tickets. We looked at books in the gift shop. We did, fortunately, eventually get tickets for the 15:00 tour.

As is his wont, Eric took a picture of the topo map.

Thus, in order to see the top of the lighthouse, we had to stand for about ten minutes, in a kerosene-scented room, while a cute young ranger, dressed in period costume, told us all about the work the lighthouse keeper had to do to keep the lamp lit. Very little of this was news to anyone who had visited as many lighthouses as we had. The one thing that was new to me was that, at least at this particular lighthouse, the keepers were required to give tours to anyone who happened to show up wanting to see the lighthouse. Given that lighthouse keepers tended to be the sorts of extreme introverts who could withstand such an isolated lifestyle, I'm sure this particular duty was unpopular with them.

If it had just been standing around for ten minutes breathing kerosene fumes and listening to the ranger, the whole tour concept would not have been so bad. But, when we finally got to the top, she only let one person up into the lamp room at a time. This meant, you only had about 30 seconds to see it and take all of your pictures! Most disappointing.

My brief glimpse at the view from the top.

Eric's picture of the view, showing the lens as well.

The lamp at Yaquina Bay lighthouse.

Eric took a picture looking up into the top of the lens.

The view through a window on the way back down the stairs.

Given the weather conditions, we elected not to walk around the park for awhile looking for marine mammals, but to get back in Sydney and move on to the next stop. This would be Devil's Punch Bowl State Recreation Area, a nicely eroded rock formation along the coast. This brought us to four state parks in four different states for the year so far. The wind was unbelievable.

Eric on the stairs going down to the beach.

The beach at the Devil's Punch Bowl.

The Devil's Punch Bowl itself.

A look deep into the Devil's Punch Bowl.

Me at the overlook, shivering in the wind. Mark made me that hat. Photo by Eric.

This antique truck was a novel place for an ice cream shop. Photo by Eric.

While I felt that the frigid wind made ice cream unpalatable, Eric disagreed with me on the seasonal appeal of frozen dairy products, and was disappointed that the truck was closed for the season.

Back in the shelter of Sydney and ready to move on to the next interesting destination, I looked through the materials that we had picked up at the Oregon Welcome Center. The next spot: Otter Crest State Scenic Viewpoint at, what do you know, Cape Foulweather. Well, wasn't that just dandy on a day like this.

Fortunately, the lookout at Cape Foulweather was enclosed inside a building. There was a sign on the inside of the door that said, "Yes, the weather is always like this." Yeesh.

The view from the lookout.

I was saddened by a sign in the lookout explaining that, while this was often a great spot from which to see whales, we don't see otters on the Oregon coast. While they've made a great comeback down in California, they're still virtually extinct in Oregon. It's even more frustrating than the lack of ice cream.

We found a cache and moved on to the next scenic area, Rocky Creek State Scenic Viewpoint. It is worth mentioning that the brochure showed these spots at mile markers along US 101, and that there were very few miles (single digits) between any given stop and the next.

We went under the bridge to find a cache.

The ocean splashing in the cove at Rocky Creek.

We kept seeing these white things flying around in the air. Were they some sort of small birds? "I think they're bits of sea foam," Eric said.

We saw where several of them had landed in and around Sydney, and Eric turned out to be correct. That's right, the wind was so strong that it was blowing sea foam around like snowflakes.

By the time we got to the next spot, Depoe Bay, it was getting too dark to take pictures of find caches. Not only had we not reached Astoria, we hadn't even come anywhere close to Seaside. We hadn't reached Tillamook, or even Lincoln City. We had come a whopping 20.43 km (12.7 mi) from where we started in Newport. How pathetic.

We did continue north past Lincoln City, not stopping to see anything in the rapidly dwindling light, to take OR 18 up toward Portland. We met Grant there, but by the time we arrived, dinner choices were limited. We ended up having Mexican.

We had breakfast at Grant's favorite restaurant, where Eric took a picture of the cute ceiling decorations.

Hours later, back in California, it was clear enough for Eric to take a picture of Mt. Shasta. The snow's not deep this year, but at least there is some.