My father came out to visit from Vermont. I had wanted for a while to show him the northeastern part of California, a little-visited volcanic wonderland of extraordinary stark beauty.

Before we left the Bay Area, though, Dad wanted to ride the brand-spankin' new Bay Bridge bike path!
The old, now defunct, bridge.

The cable-stay tower of the new bridge.

From the bike path, you get a great view of the old and new bridges together, as they converge toward the tunnel. Quite a difference, huh? If only it weren't for that stupid anchor bolt problem...

Bicycle-mounted officers of the California Highway Patrol offered to take a picture of Eric, Dad and me together.

The officers composed the pictures very carefully. I asked what qualifications were required to be on the CHP bicycle squad. They said you just had to be a member of the force and volunteer for the squad.

"You don't have to take a photography class?"

"No, you learn that as an on-the-job skill."

Mudpots still boiling, almost a century after the last eruption.

Compare to my 2008 photo, with much more steam. 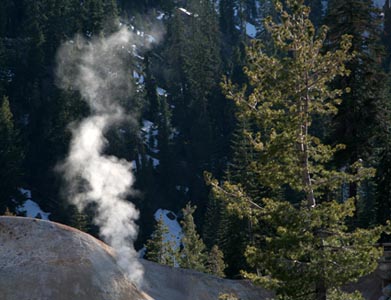 Lake Helen, with Lassen Peak in the background. See the clarity of the water.

Lassen Peak. I could tell that Dad wanted to try to hike up it, but the upper half of the trail was closed for maintenance.

The Chaos Jumbles (rocks tossed from the volcano), with what I believe is Loomis Peak in the background.

Manzanita Lake. We took the Weeble (canoe) out there in the morning.

Burney Falls. See the water seeping through the volcanic rock.

Burney Creek, which feeds the falls.

One of the Fleener Chimneys (spatter cones).

Dad at the Fleener Chimneys.

I took Dad into his first lava tube! I was quite pleased to show something entirely new to someone his age. The first cave was Mushpot Cave, which is developed with lights and interpretive signs (an introductory cave).

Then, we went into Skull Cave, a very large one that Eric and I had previously explored.

Fire lookout near the top of Schonchin Butte.

The view from the top was tremendous! Here are some volcanic craters, with Mt. Shasta in the background.

A close-up of a crater.

Dad at the summit! (Mt. Shasta in the background.)

Sydney way, way down there.

The Devil's Homestead (lava flow from the volcano).

Dad in front of the Devil's Homestead, with the butte that we climbed (further left, tallest) in the background.